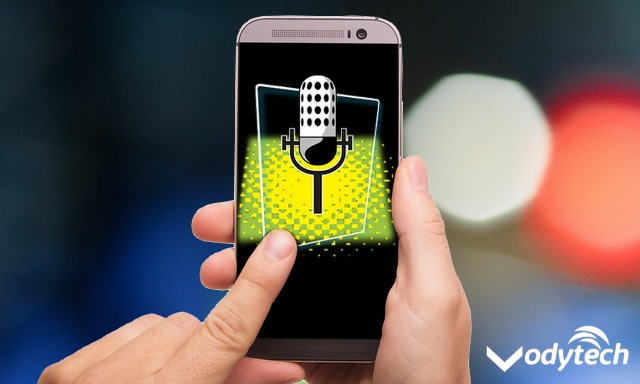 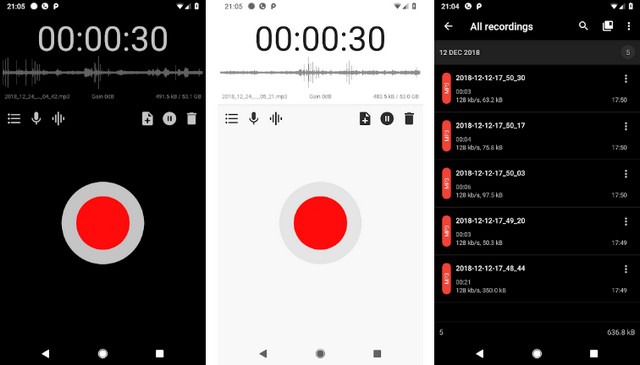 ASR Voice Recorder is one of the best voice recorder apps for Android. You can use this app to record songs, lectures, speeches, meetings, and many more. 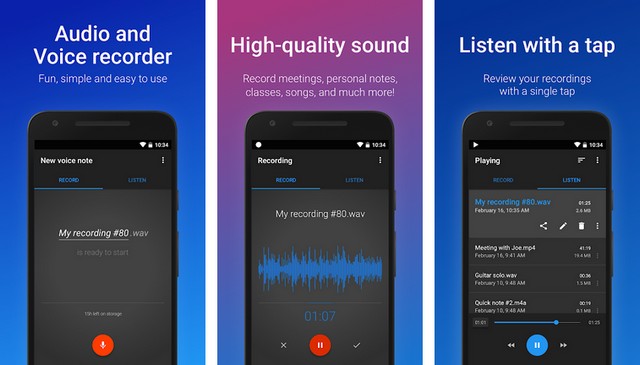 Easy Voice Recorder is a dedicated voice recorder app which you can use to record things from your phone. It also has very simple UI, opens the app, hit the mic button and it will start recording. The app also comes with some other features such as choosing the file type of the recording, widgets and many more. Moreover, the pro version also supports the stereo recording, Bluetooth microphone support and more. The free version comes with Ads and the pro version is available for $3.99. 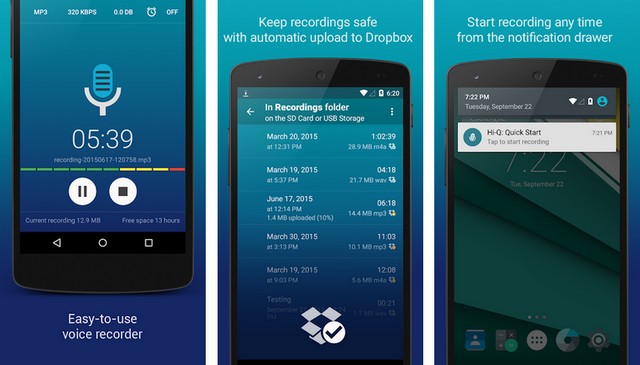 Hi-Q MP3 Voice Recorder is one of the most popular and powerful voice recorder apps. It records the voice in MP3 which means you can play it on almost every device. It also supports the cloud backup and it can do it automatically, as soon as the recording finishes, it starts uploading it to the Dropbox. There are also some other features such as widget support, WiFi Transfer, gain control and more. The pro version is available for $3.49 and the free version comes with Ads. 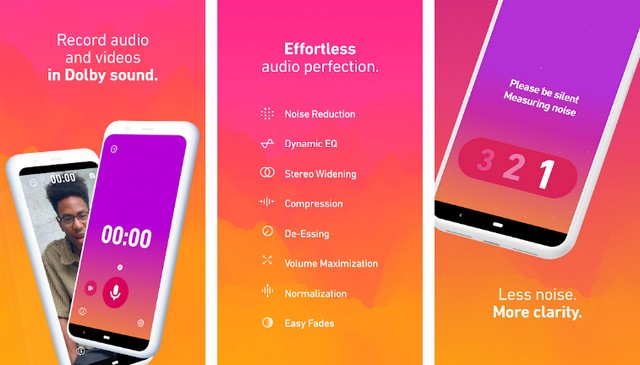 Dolby On is one of the newer voice recorder apps, but the main highlight of this app is that it’s developed by Dolby Laboratories, which is known for its quality audio services across many popular devices like laptops, speakers, and more.

The app is equipped with powerful audio processing tools like noise reduction, de-essing, and others, making it a great app for anyone who wants to record quality recording. Dolby On is still in the development phase, which means you can expect some bugs here and there, but overall it’s a pretty great app. 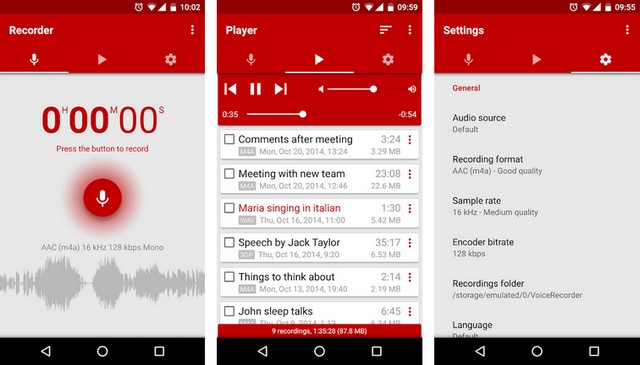 Voice Recorder PRO is another really good voice recorder app which comes with many unique features such as it allow you to record the audio in multiple formats like PCM (Wave), AAC and AMR. The app also features the very simple UI which make it easy to use and manage. You can also control the bitrate of the recording. Overall, it is a decent voice recorder app. The free version comes with Ads and the paid version is available for $1.99. 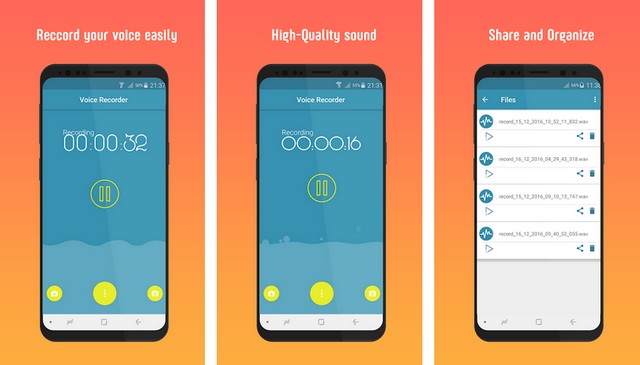 Smart Voice Recorder is another really good voice recorder app which can also record the calls. The app can be switched between the normal voice recording and call recording anytime you want. It also allows you to record the audio in multiple codes and it also supports the cloud backup as well. The app is completely free to use but there are ads which will pop up from time to time. 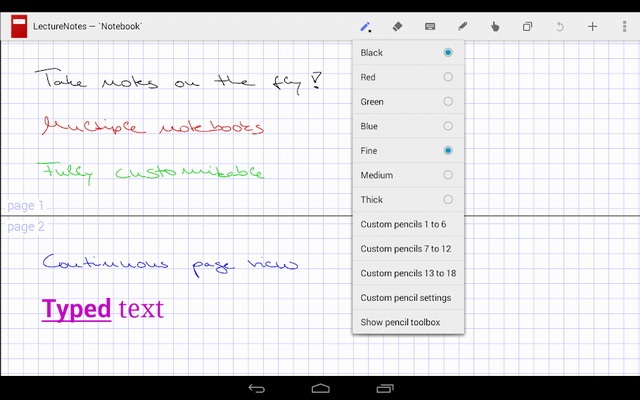 LectureNotes, as the name suggests, this app is geared toward the students. It allows you to do a lot of stuff such as taking notes, organizing those notes and use them later. The app doesn’t record the audio natively but you can buy the plugin which adds this functionality as well. You can also get a plugin for recording videos as well and it is available for $1.99. Overall, LectureNotes is a solid app but it is a premium app and it is available for $5.99 and plugins will cost you $1.99 per plugin. Music Maker Jam is a voice recording app geared toward the musicians. You can use this app for recording music, lyrics or whatever else you want to record. It can record multiple tracks and there is also a built-in editor to fine-tune your recordings and additional tools to remix or remaster the recording. The app also has flawless integration with platforms such as SoundCloud, Facebook, and other social media platforms. The app is free to use but there are in-app purchases. 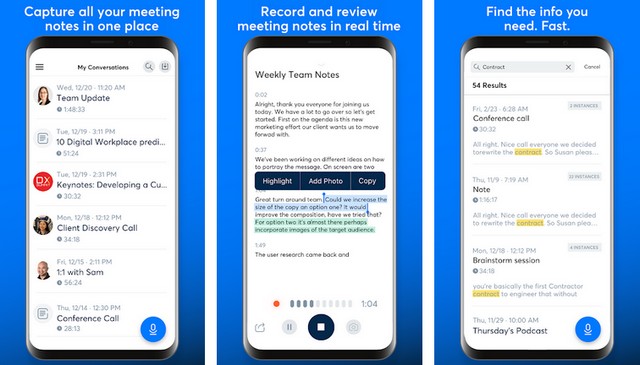 Otter Voice Notes is another voice recorder app geared toward the professional. Most of its features are for business meeting and more professional matters. In the app, you get the recording, sharing, playback, transcription service, cloud support, cross-platform support and event support for photos. The free version offers the 600 minutes of transcription service per month and paid subscriptions offer the 6000 minutes per month. Smart Recorder is a voice recorder app which allows you to record the audio and save it. One of the best features about this app is that it automatically skips the silences in the recording which is a really handy feature. Overall, it is a really good voice recorder app and it also has the call recording functionality as well. If you are using it for recording long audio then you will have to exempt it from battery saving. The free version of the app comes with Ads and the pro version is available for $1.49. 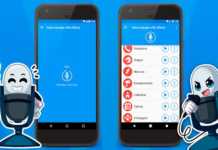 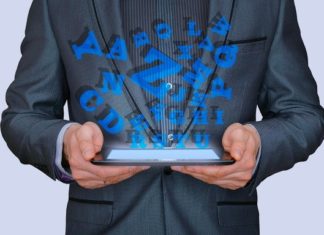 Frank Perry - 15 March 2021
Languages are the way how we humans communicate with each other and there are tons of languages out there. Learning a new language can...

10 Best Entertainment Apps for Android in 2021

ABOUT US
At Vodytech, we provide useful digital tips and reviews on your favorite gadgets, software, and apps. Our goal is to become the one-stop website for all of your favorite digital resources.
FOLLOW US
© Vodytech 2021