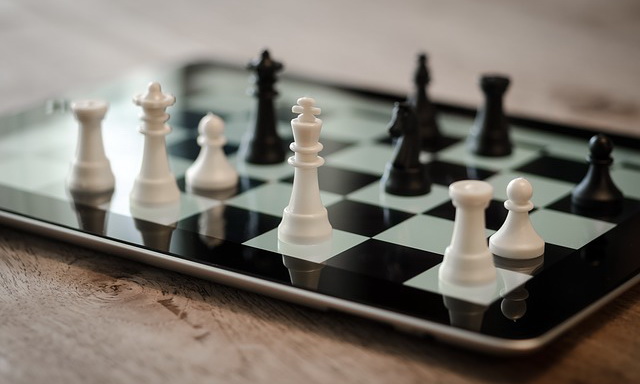 Chess is one of the oldest board games that are still very popular and millions of people spend their precious time playing it. Chess also improves your strategic skill as you can make hundreds of move at every single step which make the game more awesome and challenging to play. There are tons of chess games available on Google Play but not all of them worth downloading. We have handpicked the best chess games for Android which will provide you with the best chess playing experience. 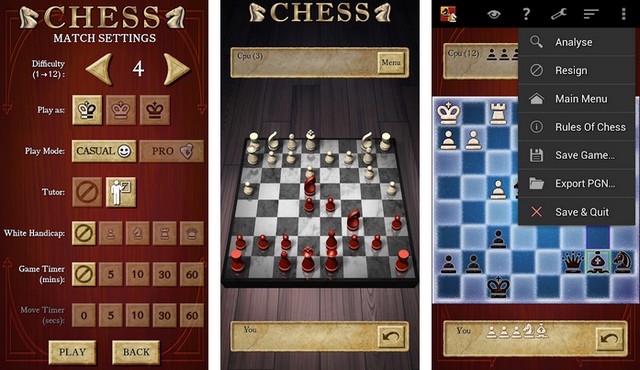 AI Factory Limited is the popular game developer on Google play, it is known for making awesome board games and chess is no exception. Chess by AI Factory Limited is one of the most popular chess games available out there. The game comes with all the basic stuff as well as advanced features which can make the game more interesting for you. It features the 12 difficulty levels which you can use if you want to get the pro level. There are achievements and leaderboards in the game which will keep you motivated. Overall, it is a nice game with a good Interface. It is also free to play but it comes with Ads that you can remove by paying $0.99. 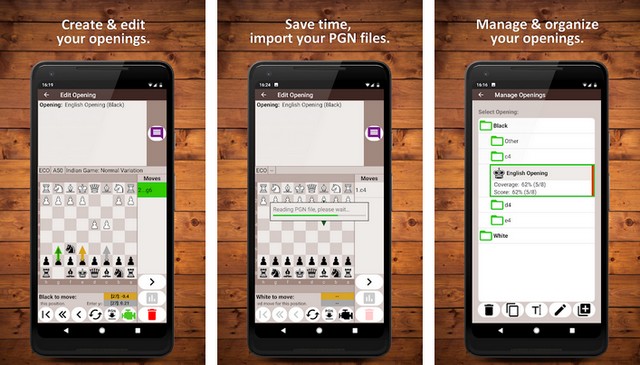 Chess Repertoire Trainer is a chess training app that is the perfect app for beginners. In this app, you will learn how to start the game and then make effective decisions to win the game. The app comes with an effective tool that monitors your moves and it helps you improve your moves. Moreover, the tool will also add the difficulty as you learn more about the game which will keep the game interesting for you. It is also free to use but it comes with pro version which adds some extra features to the game. 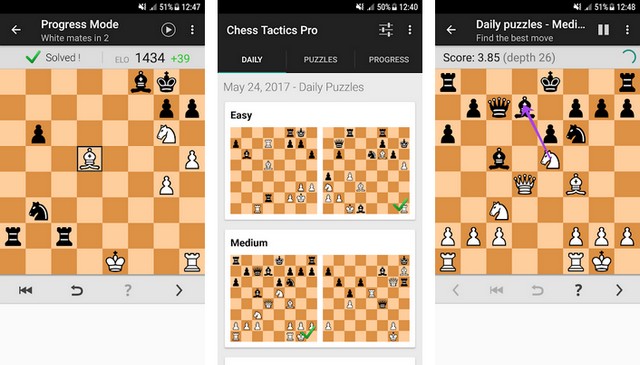 Chesa Tactics pro is a unique chess game that doesn’t come with the standard chess instead you get tons of puzzles to solve. The game features hundreds of puzzles, offline puzzle packs, daily online puzzle and many more. Moreover, as you solve more puzzles in the game, the difficulty level will gradually increase to make the puzzles more challenging for you. The developers claim the difficulty of some challenges goes up to ELO 2000+. Overall, it is a nice game and it is a perfect game for those who are looking for some different than standard chess. 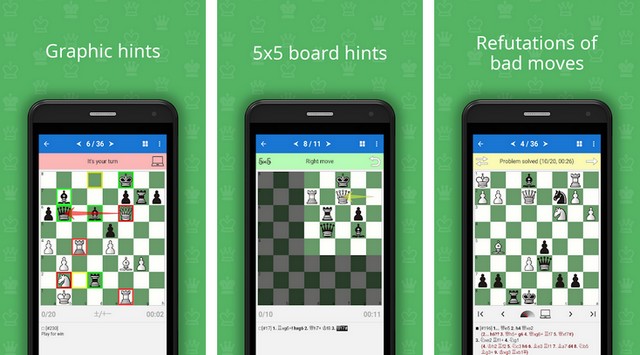 CT-ART is one of the best chess games out there and it is also the best game for beginners. The game comes with more than 2200 basic exercises, 1800 auxiliary exercises and 50 topics that will help you learn about the different aspects of chess. Thousands of these exercises will help you learn different tactics that you can use in the game. Moreover, it also tracks your ELO improvement as you progress in the game. CR-ART is also available for free with in-app purchases. 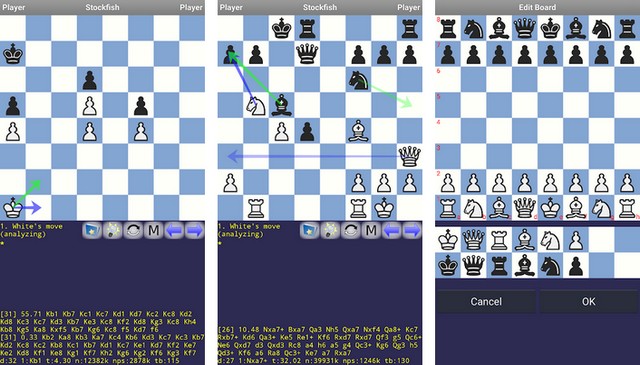 DroidFish Chess is another popular chess game that is the port of popular Stockfish chess engine with a unique GUI on top of it. The game comes with support for tablebases like Syzygy and Gaviota which is remarkable. Moreover, you can adjust the difficulty by playing with the strength of the engine. Overall, it is a very unique Chess game and you should give it a try. Real Chess by Alienforce is arguably one of the best chess games for Android. The best thing about Real Chess is that it comes with 3D Graphics which takes the whole chess experience to the next level.

On top of that, it offers the option to play with AI or real chess players from around the world. If you decide to play against AI, you will get over 2400 difficulty levels which will make the game more challenging for you. Also, it comes with tons of themes and board variants which are icing on the top. You can play Real Chess for free, but it comes with Ads. 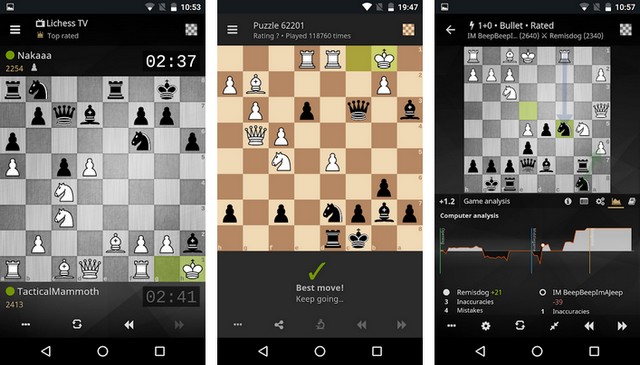 Lichess is one of the best chess games available out there and it has the player base of more than 150k chess players around the world. The game comes with tons of tournaments, chess modes and many more. Moreover, it also comes with offline functionality which is awesome. Also, it is completely free to use with no advertisements or in-app purchases. 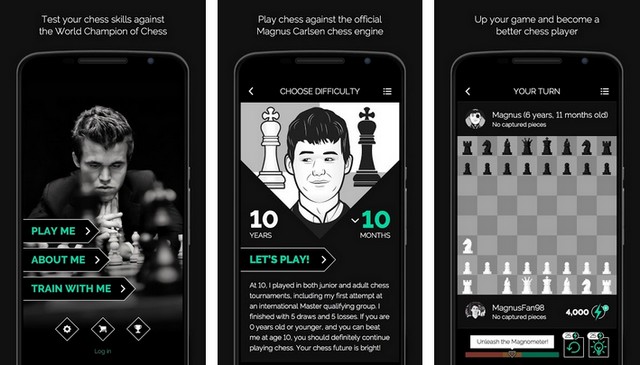 Play Magnus Chess is another remarkable chess game that features the unique chess engine which plays like the chess Grandmaster Magnus Carlsen. In the game, you can choose the age of Magnus and the engine will simulate and play like the Magnus at that age. Moreover, the game also provides the opportunity for players to play directly with the Magnus himself but you will have to first qualify. Overall, it is a decent game and you should give it a try. Really Bad Chess is another very popular chess game which provides you with standard chess. In the game. In the game, you can play chess with AI in different gaming modes. Moreover, you can also go for a pro mode which adds the versus mode which allows you to play against the other players, add theming and some other unique features. The pro version goes up to $2.99 depending on the features you add to the package. 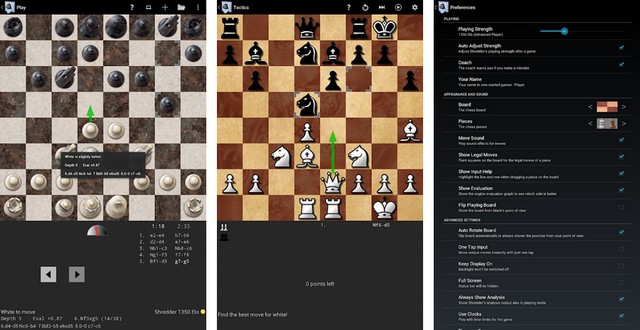 Shredder Chess is a premium chess game that comes with a number of unique features. The game features more than 1000 chess-related puzzles, adjustable difficulty level and many more. Moreover, it also comes with AI which is very good but there are occasional bugs here and there. Overall, it is a nice game and you should give it a try. You can get the game for $6.99.

These are the 10 best chess games for Android in 2021. Most of these games are free to play but some of them are paid. Let us know your favorite chess game in the comment section below. You can also check out the best card games for Android on our website. 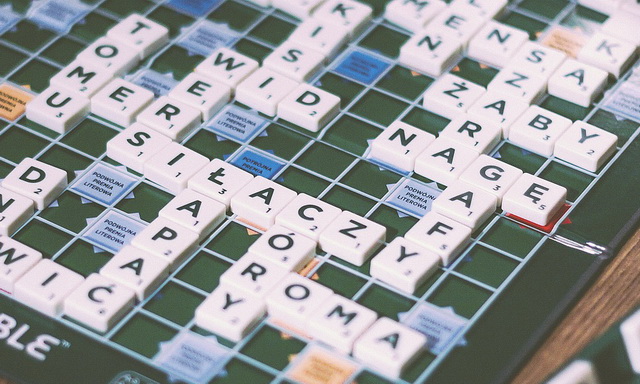 Best Scrabble Games for Android in 2022

Frank Perry - 11 February 2022
In this guide, we will share the best scrabble games for Android in 2022. Scrabble is a classic board game that has been around...